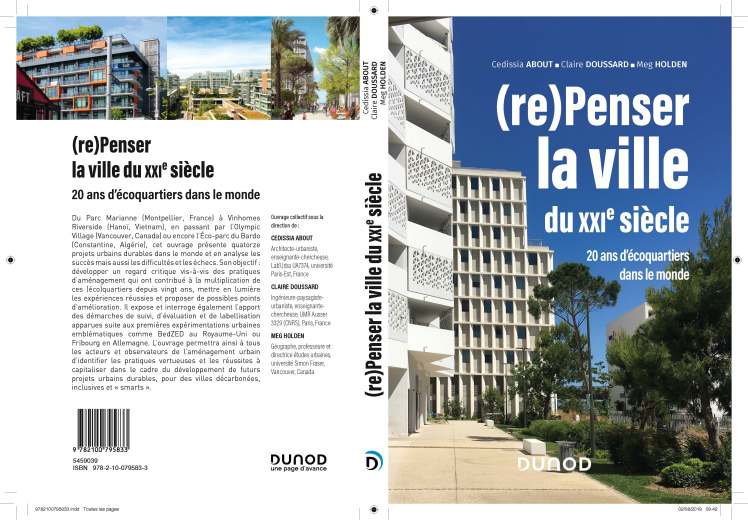 In the context of a project to study eco-urbanism around the world, this new book entitled : (Re) penser la ville du 21ème siècle presents a compilation of studies and urban analyses on the phenomenon of eco-neighbourhoods. It aims to provide a new perspective, questioning the city as we know it. It accomplishes this through the in-depth study of the following different eco-neighbourhoods:

The editors (ABOUT Cedissia, DOUSSARD Claire, HOLDEN Meg) and authors of each chapter contribute to a lateral reflection on the strong and weak points in the ecological construction of neighbourhoods around the world. This book gathers the research work of different researchers on site in the neighbourhoods studied and considered. The authors thus propose a clear and organized study of each district: context, actors, environmental and socio-economic approach and a thematic approach. The case-based chapters are  grouped into four thematic sections: the first is concerned with the consideration of environmental issues and effects on the living environment; the second examines the forms of co-creation and appropriation of neighbourhoods by citizens; the third analyses the modes of governance and the impact that governance choices have on the socio-economic balance sheets of neighbourhoods; and finally a section on results and conclusions invites us to capitalize on resilient, smart, inclusive and decentralized cities. Through these different chapters and themes, essential clarifications are provided in order to facilitate understanding of different certification and  labelling systems being employed by the different eco-neighbourhoods in their different world contexts.

The aim of this book is to analyse and provide a comparative study of the impact that a newly-redeveloped eco-neighbourhood can have on its immediate context but also on its wider urban context and the uses to which it is put. Drawing on the political opportunity structure of each of the countries whose eco-neighbourhoods are considered, the authors analyse the initial results and impacts that these neighbourhoods can have. It now seems undeniable that this trend in toward eco-neighbourhood offerings will continue in the coming years, and these projects come to life differently in different territories, with different actors, which in turn  brings new ecological attitudes to life. But it is not so easy to champion this global phenomenon because the benefits and results are still unknown. For fear of falling victim to a  short term trend or even green washing, many potential leaders of a sustainable neighbourhood transition are still reluctant to get involved. This book therefore presents ideas for reflection and improvements on these concepts of ecological districts. This comparative study makes it possible to offer a panel of factors including context, actors, territories and governance, to cover and question several problems intrinsic to eco-neighbourhoods. As a result, through the various studies, the authors are also interested in citizen participation, and provide their point of view on new mobility, for example. However, it is important to note that each example studied presents only an initial glance at the grain and character of each neighbourhood that is presented. This book therefore offers an initial reference toolbox for future planners, elected officials or residents seeking to plan and build a city that is more connected to its territory, its environment and its inhabitants.

This book therefore summarizes what theory and discourse have generated in the construction of eco-neighbourhoods around the world, what the inhabitant can bring to a design process and what designers offers as solutions to these problems. It must be acknowledged that an eco-neighbourhood provides only a partial response to the global problems highlighted in today’s environmental crises.

Via a secondary focus on the theory and history that surround eco-neighbourhoods, this book focuses mainly on the current and practical consequences of an eco-neighbourhood. The objective is not to arrive at a single and summary definition of an authentic eco-neighbourhood, but rather to consider all the elements that make it possible to create a variety of neighbourhoods of this type. The authors guide and frame the outlines of a definition of eco-neighbourhoods, but it remains broad and vague. The objective of this study is therefore to go beyond the clichés and limitations that can be found in certain theoretical formulations and to offer questions on emerging issues. Thus, the analysis focuses more on the various environmental governance and approaches that generate new ways of designing these neighbourhoods. However, it is also not a question of deciding on the merits of the notion of an eco-neighbourhood, but of showing how this concept influences and upsets the principles of the city’s factory. Initiator of many other reflections, this book questions in particular the possibility of considering larger scales in the eco-design of cities for example, or the future evolution of cities.